When I was approached by one of my colleagues to write a blog post for Black History Month, detailing my life in the Insolvency Service, my initial reaction was why would anyone be interested to read something written by me.

Having said that, it's better to be visible rather than invisible. And as Black History Month is about raising the level of visibility of the Black Asian Minority Ethnic (BAME) community past and present, I thought I'd give it a go. The Insolvency Service has a BAME network which is called FACES, or Fairness Awareness Culture Equality Support, so this is on behalf of the network. 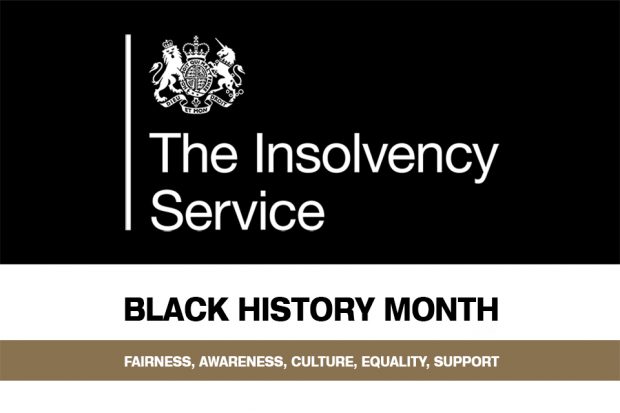 Barbados to Reading via Windrush

I'm of Afro-Caribbean heritage, and my parents and grandparents came from Barbados, as part of the Windrush generation who came to the UK during the 1950s.

I joined the civil service as a clerical officer, back in the 1980s, initially working in the cashier’s office.  I later moved on to examining and have done that for a number of years. At present, I'm working as a Senior Executive Officer, on a temporary promotion.

I sort of fell into the Insolvency Service.  I was fresh from college and looking for work. I wasn’t really aware that the Official Receiver’s office existed, and recruitment seemed to be done on a pool basis for the Civil Service generally. I’d applied for a clerical post in order to earn some money while I looked for other work. I was interviewed by a board at the local Customs and Excise office, and no one on the board was from the Official Receiver’s office.

Once I’d joined the service, the examiner role was one that interested me and caused me to stay on. I found the mix of vetting, investigation, and dealing with disqualification proceedings challenging to juggle, but very satisfying.

It gave me the chance to meet a varied cross section of society, with a smattering of the ingenious, the deluded, the deceitful and the downright criminal, sometimes all in one week. Having a good disqualification result, or prosecution outcome was always a good feeling, especially if many months of investigating had gone into evidencing the misconduct. Examining was the best job in the agency.

Working at my current level, and having staff management as part of the role, brings different challenges.  However, having worked in the Reading office for so long, I know all of my team well. Reading is now teamed with Southampton and Brighton, so I hope that I can earn the same respect from the staff at those offices as I appear to have from my team in Reading.

Apart from having staff management responsibility, the main difference is that I’m dealing primarily with training - so that we can get the best out of our new recruits - and problem solving, more than I am dealing with casework.

The bankrupts or directors who do not cooperate with our investigations will end up on my public examination list. Those with a chip on their shoulder and a tendency to argue about every decision will require my involvement. The technical query that does not have an immediate solution will also gravitate to me. I find that the satisfaction in the role is less one of personal targets but more in facilitating my team to do well.

Well, I have laid out what I do and what my past in the agency has been, and you might ask what has that got to do with Black History Month?  The purpose here is just to raise some visibility, just to say here I am, I’m black (obvious to those who’ve met me), and that I'm part of the fabric of the service and of the country, contributing, doing a day job and getting on with life.

The purpose of Black History Month is not just to say that black people are here, but that we have been part of the fabric of the country for a long time. And that black history, is just history and that everyone misses out on the full picture if they ignore parts of the past, whether that is the black contribution, the contribution of women or any other segment of society that is not under the category of the “great and the good”.

The husband of one of my former colleagues was a real history buff and researched the contribution of Sikh soldiers to the war effort during the first and second world wars.  This resulted in an exhibition at the local museum, which was fascinating.

The exhibition is long over, but if you’re at all interested in looking into the topic of black history try these books; Mother Country, by Stephen Bourne, and Black Poppies also by Stephen Bourne. You could also try reading up on some people you may not be aware of, such as William Cuffay, Mary Seacole, Ignatious Sancho and Pablo Fanque.